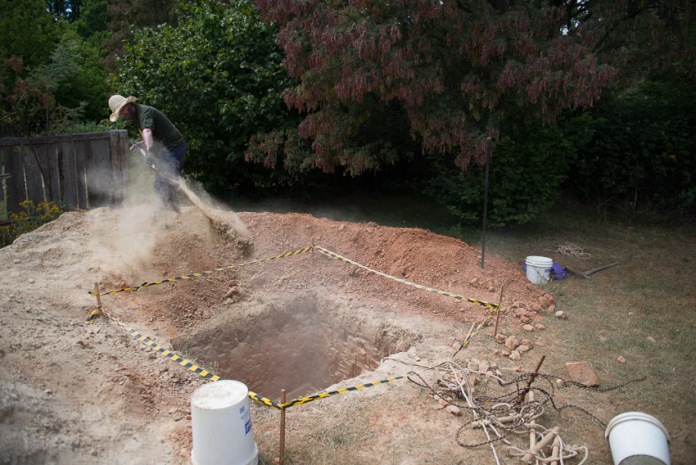 Work again intervened and this is the first chance I have had to post this entry in the blog.  This is me on the last day at Hill End, filling in.  It was perhaps the hardest day of work, because I had to finish by the end of the day.  It was my only 12 hour day.  It was also a little easier because there was no work with the crow bar, no climbing in and out, no pulling buckets of dirt up.  It was just me shovelling dirt into the hole. 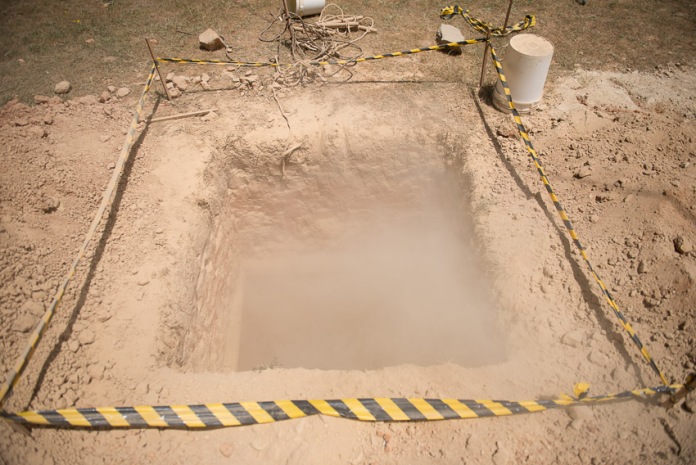 I tried to put the dirt back in the order that it came out.  This was mostly because I want to be able to restore the lawn to its pre-hole condition and I thought ending up with a lot of clay on the top would make this difficult.  Again ignorance.  Of course my efforts to separate the various layers of dirt were relatively futile and in the end it was a pretty confused endeavour.  Still, it gave me something to structure the work on.  What did become evident very early on was that I would have a lot more dirt to put into the hole than what I took out of it.  This left me with a rather large mound of excess clay and topsoil that wouldn’t fit back into the hole that it came out of,  because it was no longer compacted after being broken up and removed.

This picture doesn’t show very well the height of the mound around the hole but it is a considerable excess.  While I don’t consider myself an “environmental” artist as such, my concern for the environment and those values I hold in relationship to it make it imperative that I restore it to a condition comparable to that in which I found it.  Unlike certain resources extraction companies, this phase of the work is not done as a generally resisted obligation to be met with the minimum conditions of responsibility.  It is done with all the creative motivation that I could bring to any work, and upon successful completion brings the sense of gratification that I pursue in the making of any object of beauty or verisimilitude.  I am going to have to wait for this soil to settle first, then I will fill it in with the preserved topsoil and after that I will reseed the lawn.  I can’t wait to see this site looking as though I had never been here.

Before I go, I discovered that my little project had been picked up by a gold mining forum and it generated quite a discussion.  It gives the project yet another dimension: http://golddetecting.4umer.net/t17324-this-guy-at-hill-end-likes-to-dig-holes